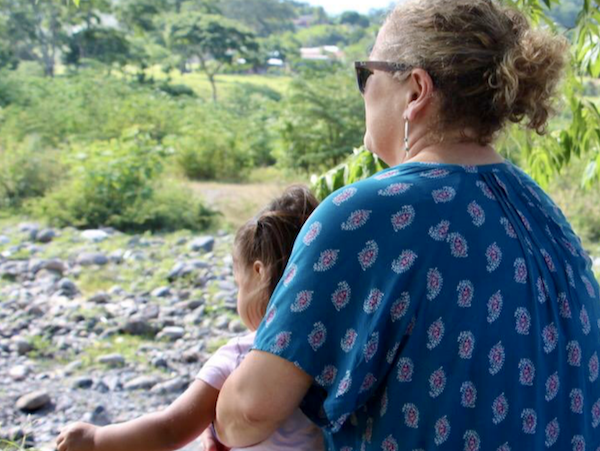 Several of you have asked me how it is going for the girls at Our Little Roses in Honduras right now, so I thought I would send a little update since my arrival here 10 days ago.

I left Monterey on Thursday afternoon, August 20. We were in the middle of all of the lightning fires and the air was thick, dry, and brown on the drive up to SFO. I had a massive amount of luggage with me as I was carrying generous donations from many of you, including new undergarments for all of the girls and art supplies to replenish those that we used during our summer camp in July.

I flew overnight to Miami, changed planes and continued on for another three hours to San Pedro Sula. On our approach to the tarmac, the view from my window seat was stunning, most likely because it was in such sharp contrast to the dry California I had just left. The turquoise waters, green mountains, lush lowlands, and rows of palm trees looked like they had been colored in with neon crayons.

On the ground, my fellow passengers and I disembarked and walked along a path of yellow painted dots, each six feet apart, as though we were in a giant Twister game. In order to gain access into the country, I was prepared with impeccable documentation. I had to show several agents my negative Covid test results, and I handed over a letter from Our Little Roses assuring customs that I was bringing in the undergarments to the girls, not for resale. I had my passport and immigration form and a cart toppling with luggage that went through a final security scan. After an hour and a half of proving myself to one officer after another, I made it to the sliding doors that normally open up to a cacophony of excited well-wishers waiting in the arrival terminal for their families.

In contrast to a crowded Miami airport I had just left, however, no one was on the other side of the doors. No stores were open. No Dunkin’ Donuts. No hand-made welcome signs for relatives who, for the first time since the country was locked down and the borders sealed in March, could come home or visit. It was so odd to see an airport with absolutely no activity. Moving on, I continued through the exit doors to the parking lot and was met by a familiar wall of stifling humidity and heat, as well as the twinkling eyes of our driver, Danilo, who I’m pretty sure was smiling under his mask.

Danilo and I did not exchange our usual hugs, how’s-the-family, and jovial banter on the 20-minute trip back to Our Little Roses. Instead, I sat in the very back of the van and looked at my new surroundings while Danilo negotiated the remains of roadblocks and detours. Roads that are normally full of cars, buses, horse-drawn carts, motorcycles, and chickens were nearly vacant. Honduras is only just now opening up to some transportation, and on that day, we were unencumbered by other vehicles. In no time at all, the grand entrance gates of Our Little Roses opened for us to drive through, as though we had arrived at the Emerald City. We stopped at security to wash the tires of the van with bleach, and soles of our shoes with the same. Then we continued down the driveway to the building that houses our school, dorms for visitors, and administration, and a second-floor apartment where I stay.

I was greeted at a distance by several of the girls who had gathered on the driveway below as I waved to them from the balcony. I was exhausted, hot, and overcome with emotion. It seemed like such a dream to finally be here, after months of planning and jumping through hoops. I was the last visitor to leave Our Little Roses in March, and the first to return. To me, just standing on the property was monumental. After saying hello, the girls wanted to know if I had brought anyone else with me. They wanted all of my friends from our summer camp to suddenly appear as well!

Since that day, I have been under quarantine. I go to my office which is on the same floor as the apartment. All of the adults I work with and see are masked. It’s funny how easy it is to get used to telling people’s facial expressions from the eyes that peek out above the cloth coverings. The girls do not wear masks because they never leave the property. They have not set foot beyond the walls of their environs for six months.

As an administrator and teacher, my days have been filled with Zoom meetings and the usual gearing up for a new school year. We need to make sure that books are sent home to all of our students in the neighborhood and we have outfitted 30 computers in our technology lab with cameras and microphones so that our girls can each use their own device.

It is late on Sunday afternoon right now. I can hear the girls all shouting, laughing, and playing outside my window and I am anxious to go and join them. I will supply them with sidewalk chalk, crayons and coloring books so that we can share some creative time together even while I maintain my distance from them. I am attaching a few images from my first days here. A couple of them are from the afternoon when the girls all got packets of new undergarments from St. Mary’s. I hope that you can see their delight with their gifts. They and the staff are so grateful.