Letter From a Small Red Church 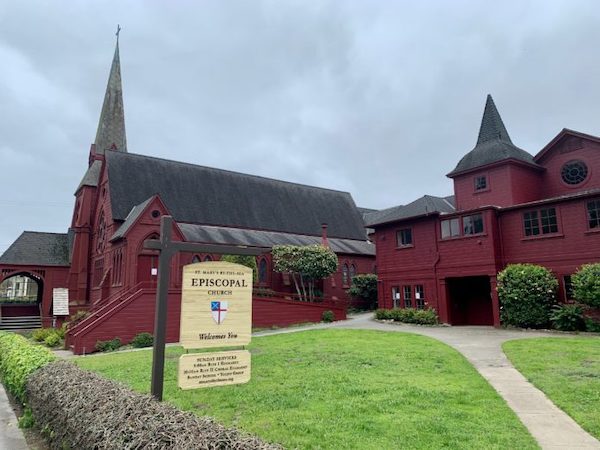 Originally published in The Occidental, the student-run newspaper of Occidental College in Los Angeles.

As part of The Occidental’s COVID-19 coverage, we are running a series titled “Letters from” written by staff writers, editors and Occidental students. These letters aim to document the experience and insights of Occidental students as they adjust to new circumstances.

The parish hall of St. Mary’s by-the-Sea Episcopal Church in Pacific Grove, CA, once the site of coffee hours, Christmas pageants and choral concerts, is silent and dark now, lined with bags of non-perishables from the county food bank. The chapel itself has been shuttered for weeks; only the food pantry remains open. Three days a week, families gather in the courtyard and shout their requests up the parish hall stairs. Volunteers pivot from packing to distribution tables, executing an intricate system to maintain social distancing. On Fridays, when I volunteer, I gather donated items from the supermarket, pack them into the parish hall’s dingy fridges and disinfect every surface in sight. When we open, I beckon the next recipient with my eyebrows, our greetings and smiles muffled behind masks. In recent weeks, we’ve seen double our normal demand.

This is the same small, red church where my parents got married nearly 28 years ago. It must have felt markedly different then, the site of a cheerful wedding set against the backdrop of the Monterey Bay, light ricocheting in through the stained glass windows to illuminate a chapel packed with guests. Applause and happy tears once filled this compound as my grandparents walked my mom, a bubbly linguistics student, and my dad, a soft-spoken but witty Naval officer, down the aisle.

My parents left Pacific Grove shortly after. They spent many periods exiled from one another: my dad deployed at sea, my mom left on shore to pretend that such absence was normal. Time rolled on — I arrived first, then my sister — and as relatives celebrated birthdays and weddings with each other, my parents raised a family away from them, having traded stability for adventure. It was exhilarating for a time, then lonely. When my dad left the Navy and we returned to Pacific Grove in 2013, time had transformed many things. It had made me into a high schooler. It had closed the peninsula’s military base and changed the name of my mom’s graduate school. It had taken two of my grandparents.

St. Mary’s by-the-Sea, though, had stayed more or less the same. When we decided to join its congregation, it felt as if we were reconnecting with severed roots. I grumbled about the early Sunday mornings, but I enjoyed feeling as though my transient childhood had been joined to some greater familial narrative. Slowly, I became more spiritual. It wasn’t because of scripture, of which I could recite no more than a few verses, but because of the Episcopalian social justice tradition — a doctrine that compels followers to love and fight radically within this existence and rejects the idea that God alone dictates the world. To me, the St. Mary’s food pantry was one manifestation of this doctrine, though I only volunteered there sporadically during high school. 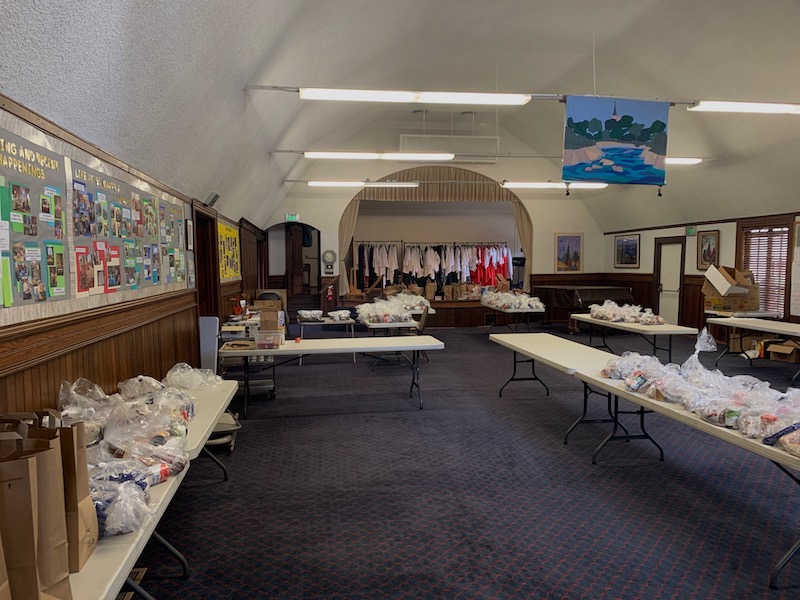 Now, as I find myself back in Pacific Grove for the longest period of time since leaving for Occidental in 2017, the food pantry at St. Mary’s has become an outsized part of my life. The pandemic and my subsequent return home engendered twin crises for me: boredom and helplessness. Working at St. Mary’s burdened food pantry seemed a way to alleviate both, if only superficially.

While I approached this new role at the food pantry with the excitement of someone evading house arrest, my mom had her own concerns. Her dad, my last remaining grandparent, lives just a mile from us now. Protecting his health has become our household’s collective responsibility. Mitigating his isolation — organizing six-foot-apart rendezvous in our backyard, arranging dinners with empty chairs in between him and us — remains contingent on our collective health. Every time I leave the house, I notice a small flash of panic in my mom’s eyes — a fear that the next time my grandpa comes over, the germs I’ve transported from a church counter will evade the Lysol wipes she uses to clean the dinner table every few hours.

Nonetheless, armed with the hubris of a 21-year-old college student, I left for my Friday supermarket run a few weeks back with a mask but no gloves. I had about finished filling the back of my dad’s Ford with bagels and yogurt when I noticed I had sliced a finger. I began to hyperventilate, my mind racing to every object my open cut might have touched in the past hour. Had I infected myself? Had I contaminated the food? Surely, I would get my grandpa sick. People would die because of me.

Racing back to the church, itching to scrub my hands skinless, I chided myself. Coronavirus isn’t even bloodborne! It didn’t matter. As I shoved the deadly pastries into the fridges, compulsively changing gloves every five minutes, alone in a dark hall haunted by abandoned acolyte robes and littered leaflets, I fought back tears. I hated feeling so afraid of this place I loved, so terrified to touch the people closest to me. When I got home, I hugged my mom and sister. I wouldn’t go near my grandpa. 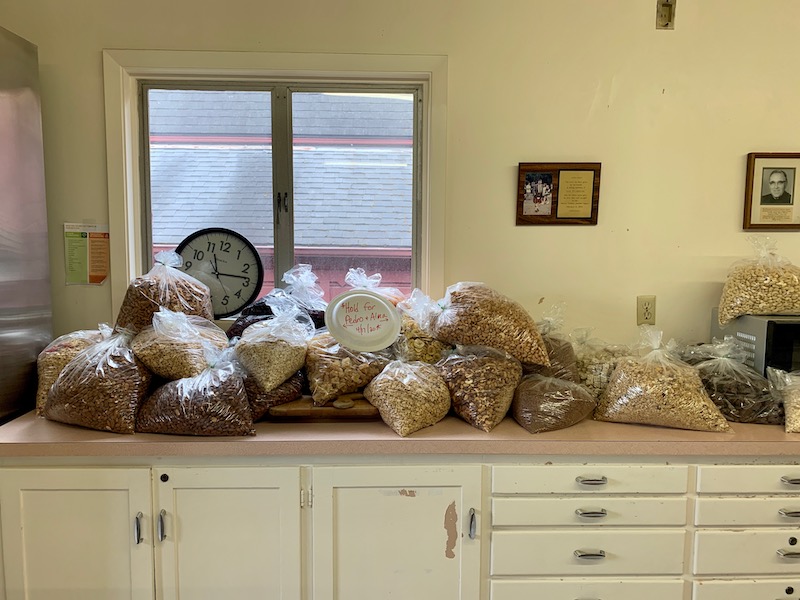 I don’t know if God exists. I don’t know if God plans everything or anything at all. But if I did know these things — if God were scientific fact — there would be no language of “faith,” no talk of “belief,” no room for personal interpretation. If God were scientific fact, then perhaps I would believe there to be some logic or lesson to a pandemic that kills thousands and petrifies millions, and that certitude would be comforting.

All I feel is sadness, loneliness, fear, anger, exhaustion, bewilderment. Paradoxically, navigating this ignorance and smallness is where I find God. I don’t know if things will get better. I have faith that they will. I don’t know if I can help. I have faith that I can. But for many people, things won’t get better and I can’t help. I have to sit with that, learn that the world careens between controlled and uncontrollable, and bear witness to the vast uncertainty of all manifesting in the unpredictable lives of each.

When this passes, time will restore some things and take others. It will restore my small, red church to the beauty of my parents’ wedding day only to shutter it again, inevitably, however many years from now. It will send me back to Occidental; then I will graduate. It will allow me to hug my grandpa and then it will take him from me. It will do the same with my parents, my sister. 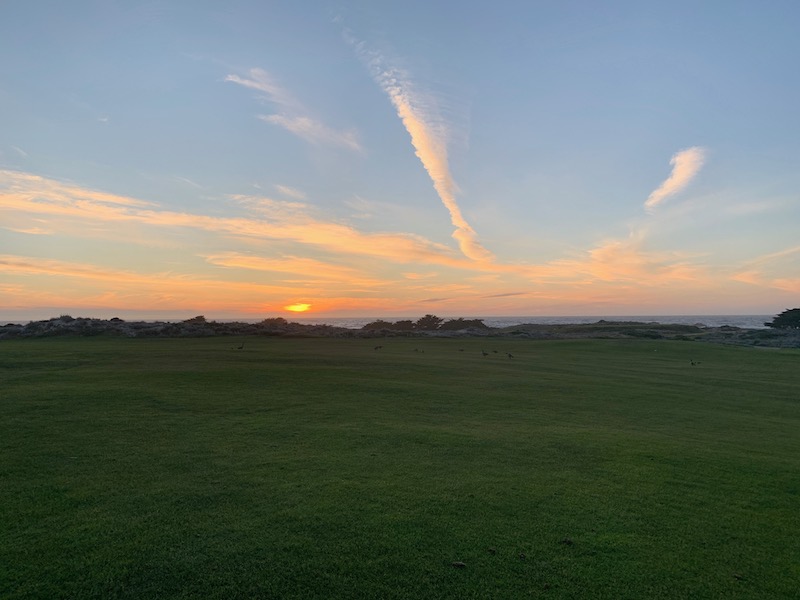 The sun sets over the Monterey Peninsula. Photo courtesy of Zach Goodwin.

COVID-19 Re-entry Planning -We are the church!