St. Mary’s was founded by a small group of Episcopal women on Annunciation Day in 1886. It was the first church building constructed in Pacific Grove. The architect modeled St. Mary’s after a church in Bath, England. On July 10, 1887, The Rt. Reverend Bishop Kip, the first Episcopal Bishop of California, presided at the dedication of St. Mary’s.

In 1890 the congregation built a rectory and a parish hall on the grounds. For decades St. Mary’s parish hall served Pacific Grove as the largest meeting hall in town, and it hosted dramas, concerts, and meetings.

Over the next 20 years, the congregation outgrew the little church and in 1911, the church was greatly enlarged by splitting it in half and adding two bays as well as the front porch. But the parish kept growing, and in 1965 St. Mary’s replaced the old rectory with a two-story Christian education building, now known as Clay Hall.

Over the years, memorial stained-glass windows in a variety of styles were given to the church, replacing many of the original brown windows. In 1922, farm machinery tycoon Cyrus McCormick, who had married his wife, Harriet, at St. Mary’s, donated a pair of stained glass flower windows by Louis Comfort Tiffany as a memorial to Harriet. In 1996, the parish installed a 20-rank Schantz pipe organ. In 1991, the parish hall was dedicated as Edwards Hall in honor of The Rev. Dr. Dwight W. Edwards, our rector from 1973 to 1998.

The most recent addition to St. Mary’s is the Leslie Garden, which includes a columbarium. It was completed and consecrated in 2016, named in honor of retiring rector, The Rev. Richard B. Leslie.

St. Mary’s Parish was founded by a small group of Episcopal women in 1886. It was built, in 1887, on land donated by the Pacific Improvement Company and was the first church building constructed in Pacific Grove. The architect, William Hamilton, of Sacramento, modeled St. Mary’s after a church in Bath, England. On July 10, 1887, The Rt. Reverend Bishop Kip, the first Episcopal Bishop of California, presided at the dedication of what came to be known as the “little red church that cares.” 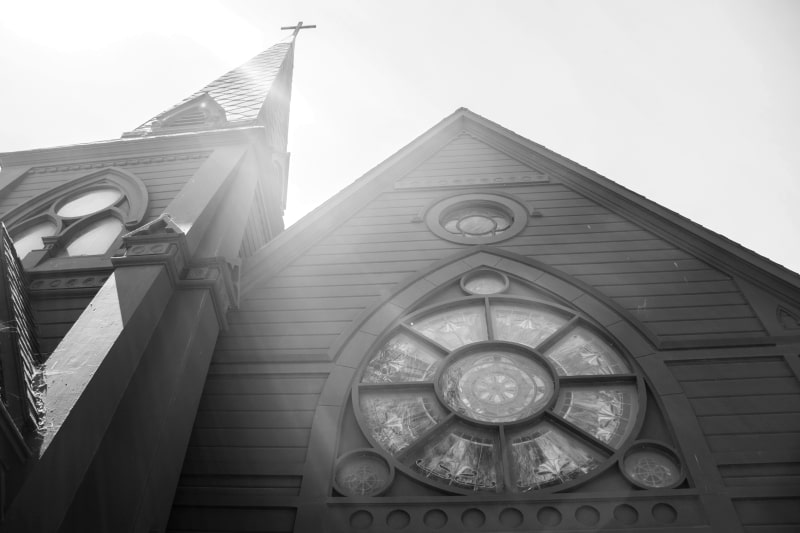 The church was significantly enlarged in 1911 by splitting it in half and adding the choir and the first two bays. This enlargement was based on a plan devised by Lewis P. Hobart, the architect of Grace Cathedral in San Francisco. The porch entry was also added. The parish hall was constructed in 1893 and dedicated in 1991 to the Reverend Dwight Edwards, Rector for 25 years before his retirement in 1998. The education and office building, named after Rev. D. Albert Clay, Rector from 1926-1936, was erected in 1965 on the site of the former rectory. Both the church and Edwards Hall are constructed of No. 1 grade redwood no longer available at any price today. The church interior also includes pine, cedar, fir and walnut. The chancel rail is of oak and the bas relief reredos and the memorial altar is camphor wood. The church bell, one of the first gifts to the parish, was donated before the church itself was built.

The present organ, built by Schantz Organ Company of Ohio, was installed in 1996. Internationally known organist, David Higgs, played the inaugural concert. The organ contains 20 ranks of pipes, two keyboards and a pedalboard. It has an electro pneumatic action. Some pipes are wood, others of a metal alloy of tin and lead. There are 1157 pipes on the wind chests in the loft over the console.

The memorial altar is dedicated to those who have served in the armed forces. The cross was designed by E. B. Lewis and memorializes, with four gold stars, the men from St. Mary’s who died in WWI. The reredos, above the altar, was designed by Sigismund Wolf of Carmel, and carved by Taiwanese craftsmen. The Stations of the Cross were gifts from the craftsmen to St. Mary’s.

The Madonna at the rear of the church was hand carved in Italy and given in 1981 in memory or Erik Olinger. The Italian marble baptismal font was one of the first gifts to the church, donated in 1887 by Mrs. A.A. Taft of New York City.

St. Mary’s windows are beautiful and each one, created and donated over many decades, has its own history and story to tell. As you view these windows, consider a visit to St. Mary’s to appreciate this sacred space in person. You are welcome to join us for services and enjoy this special place adored by countless worshippers for over a century.

The “Annunciation Window” above the altar, which contains over 300 pieces of glass, was designed and made by Bruce Porter of San Francisco in memory of Deaconess Helen Reed, a founding guild member. The Angel Gabriel with the lily, a symbol of purity, appears to Mary to announce she will be the mother of the Christ Child. It is intentionally designed to depict Monterey Bay and locally grown plants; a wild iris and a cypress tree. The bible on her lap is open to the passage which foretells the event: Isaiah 7:14. 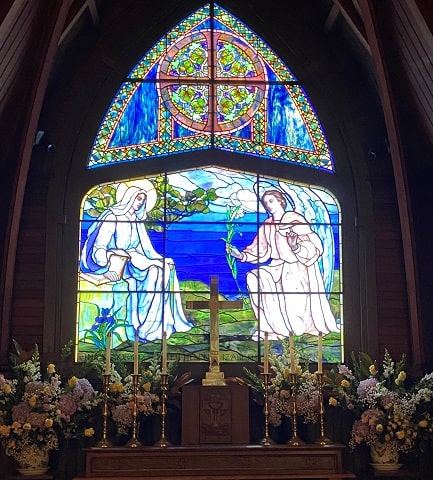 Visit of the Magi

A pair of windows depicting the Magi at the stable of Bethlehem with the Holy Family, made in 1935 by Elwood Potts in Philadelphia in memory of Agatha Few. Notice what looks like a woman among the three bearing gifts. 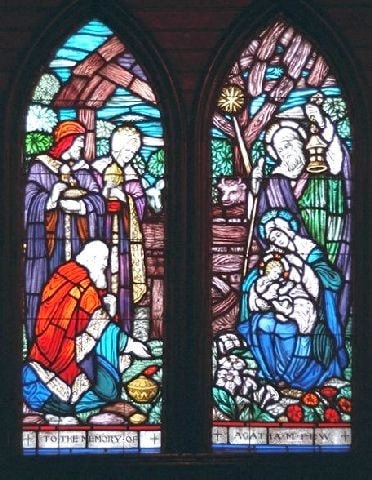 A pair of windows depicting two of the Evangelists – St. Mark and the Parable of the Sower, and St. Luke and the Miracle of Loaves and Fishes – made in 1941 by Charles J. Connick in Boston, in memory of Etta Elliot Olmsted. 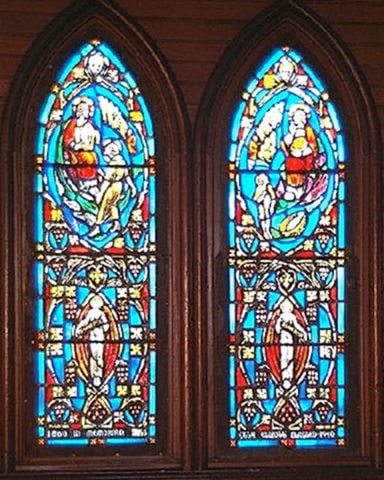 This pair of windows is one of the three pair remaining of the original glass in the 1887 building. They are in memory of Margaret and Anita Polhemus and were designed and made by a now unknown San Francisco firm. 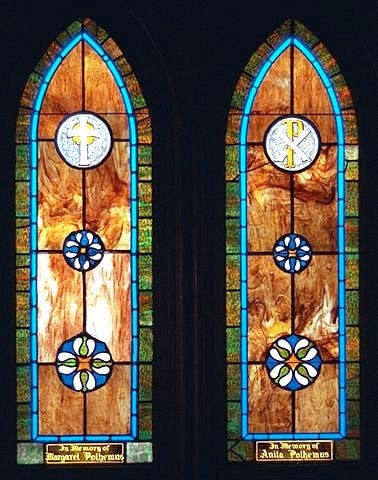 A pair of windows: one depicting St. Matthew and St. John with the scene of the Resurrection, the other is St. Thomas with the risen Christ made in 1954 by the Cummings Studios in San Francisco, in memory of Emily Cady Gratiot and William March Gratiot. 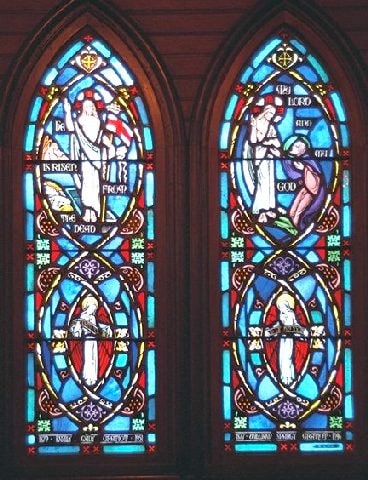 The famous Louis C. Tiffany windows, given in 1922 by Cyrus H. McCormick, are in memory of his wife Harriet. Married at St. Mary’s in 1889, the McCormicks, of the great McCormick farm machinery fortune, were generous benefactors of the church all of their lives. 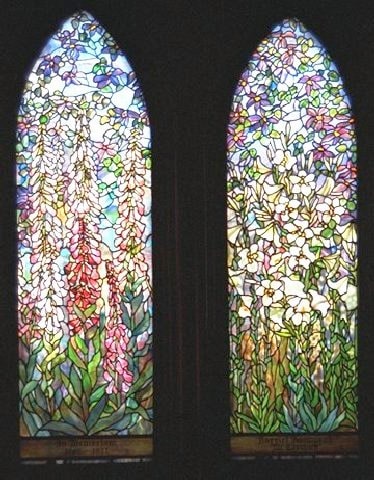 Christ standing on the Wheel of Eternity with attendant angels, light and fire at his feet, and a warrior saint in 15th Century armor bearing a crosier, was designed by Elwood Potts of Philadelphia in 1935, in memory of Daniel B. Fifield and Matilda V. Fifield. 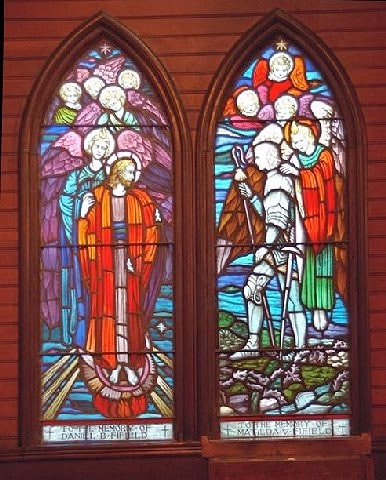 A pair of windows depicting the Holy Spirit as a dove, descending from heaven, and a lamb symbolizing Christ are in memory of Emily Jenison Dills and Jenny Miriam Page, two of the founding members of the Parish. 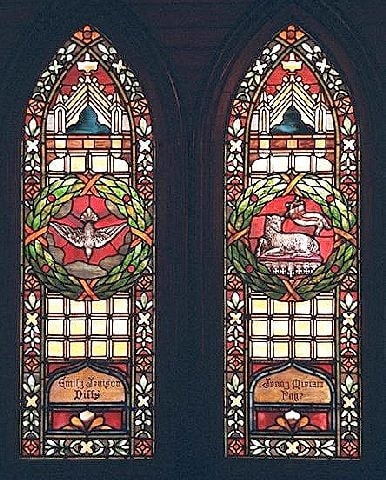 The Presentation of Christ

The presentation of Christ in the Temple with St. Mary, St. Joseph, St. Simon and St. Anne, designed by Elwood Potts in Philadelphia in 1935, in memory of Charles R. Few. 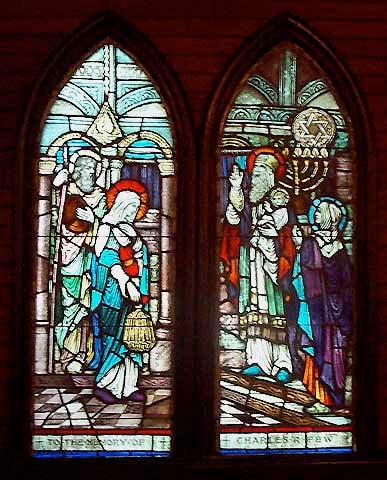 A pair of windows depicting two of Christ’s healing miracles: the woman sick for 12 years and the blind man made to see, by the Cummings Studios in San Francisco in 1954, in memory of William Henry Henley Chapman and Margaret McCaskey Chapman.